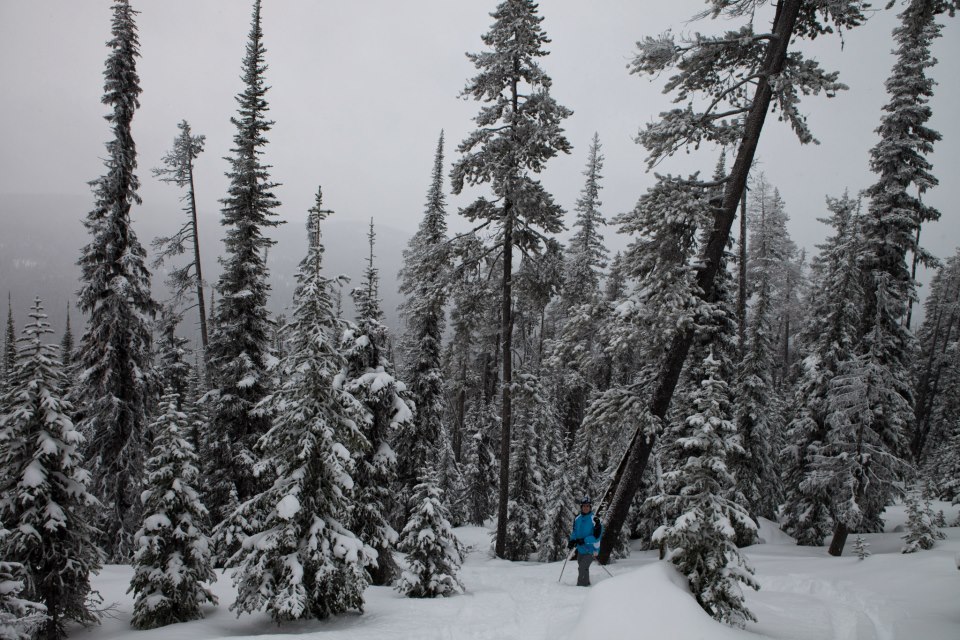 Among the trees and fresh powder at Big White resort.

Big White is an incredible family-friendly ski resort in British Columbia’s southern interior. Located about 40 minutes from Kelowna, B.C., Big White is known for a great range of terrain and lots of snow.

Getting to Big White

The nearest major airport is Kelowna International Airport (YLW). It’s serviced by flights from major airlines such as WestJet and Air Canada, with daily flights coming in mostly from Alberta and the rest of B.C. You can easily fly in from elsewhere in North America, with most flights connecting through Calgary, Edmonton or Vancouver. Even United Airlines flies to Kelowna, direct from San Francisco (SFO). 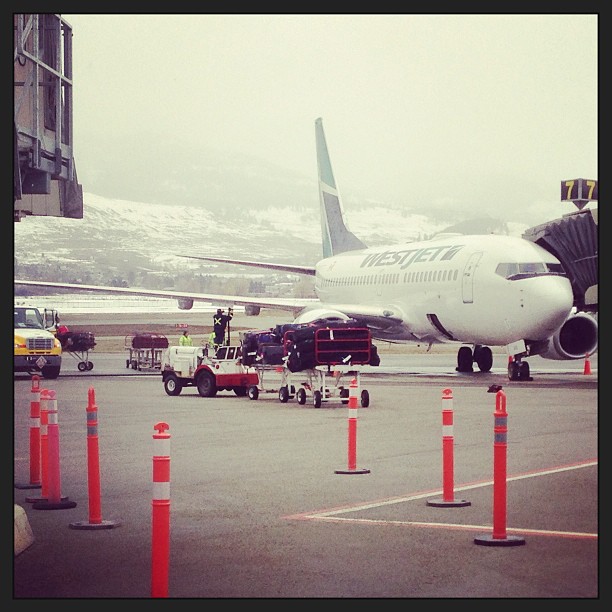 A WestJet flight from Toronto is parked outside the terminal in Kelowna.

To get to the mountain, you may drive yourself to the resort (about 40 minutes) or take a shuttle. Parking at Big White is free, which means you can stay in Kelowna and just drive in to hit the slopes.

Airport transfers are frequent and should be booked ahead of time through Big White’s Central Reservations.  The shuttle service is a convenient, worry-free and reliable way to get to the resort.

Note: Before you get to Big White, squeeze in a run to the grocery store and liquor store. There’s a small basic grocery store/liquor store in the village, but the prices are as inflated as a medicine ball and the hours can be limited. 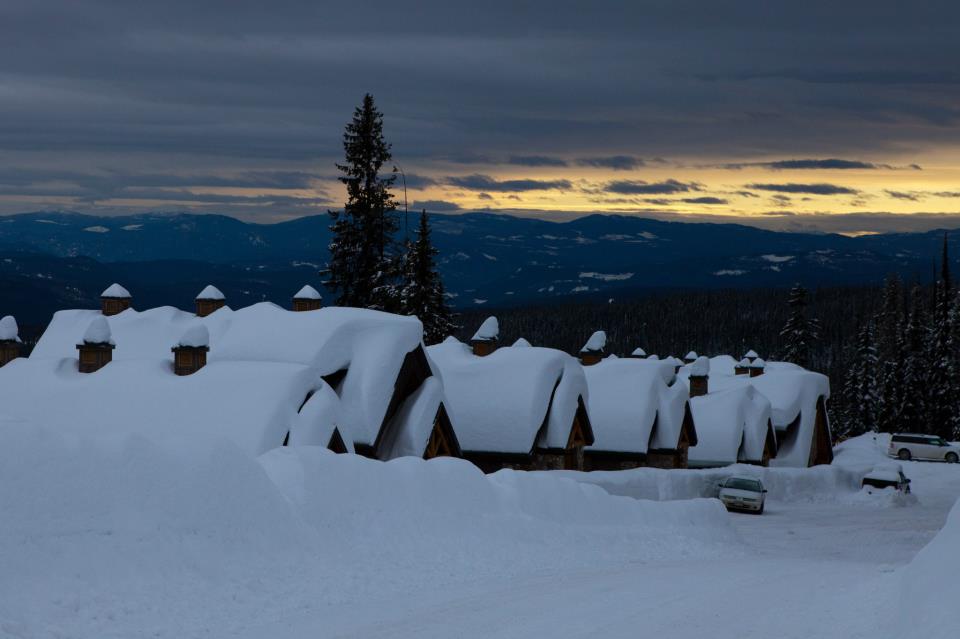 These well-appointed rental cabins are a great option for small groups or families.

Some people may like to stay in Kelowna and drive up to Big White for skiing and snowboarding. Lodging is cheaper in the city, but you’ll have to allot time to get to and from the slopes. And if it snows (as it tends to at Big White) you could be in for a treacherous drive, while others will kick back with a beer after a day on the slopes. 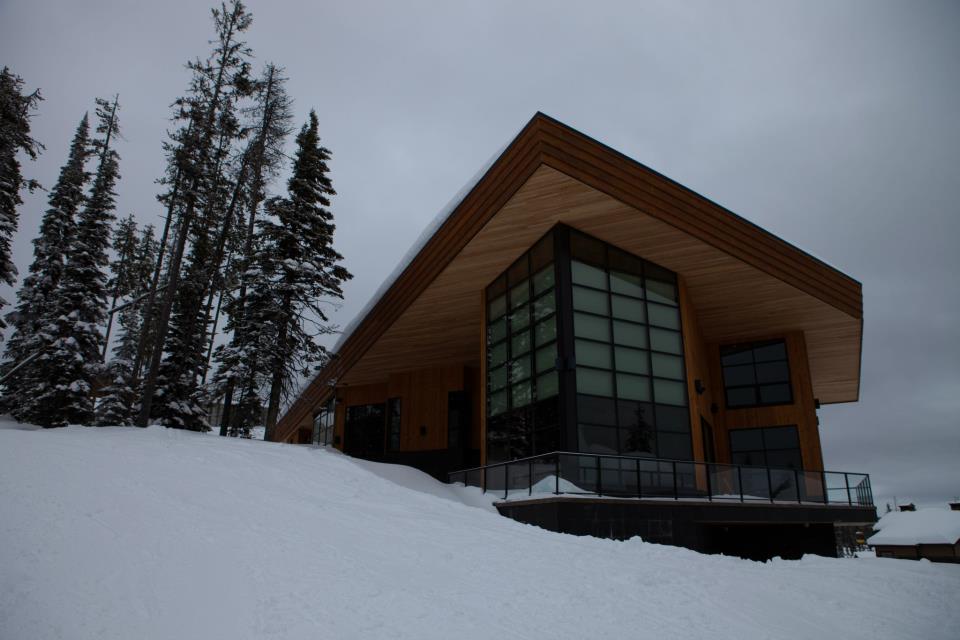 A luxury rental at Big White.

The best way to book a place to stay at Big White is through their Central Reservations agency. Yes, the name sounds a little bit socialist, but hey – they do a good job of keeping your visit organized.

Choose from a suite in one of their three full-service hotels, or rent out a whole vacation log cabin. We went with the latter option, and found ourselves in an comfortable, well-appointed two bedroom vacation home. It was outfitted with two two bathrooms, a full kitchen and a covered deck with a hot tub.

It seemed like there was no better place to stay on the mountain, but of course, we could see even more luxurious homes along the trails with ski-in and ski-out access.

A large chunk of the accommodations at Big White are ski-in ski-out.

You can save some money on your lift tickets by bundling it with your lodging.

Otherwise, try to pick up a Biggie Card to save $20 a day on your adult lift tickets. The catch is that you have to buy this card in person, only at B.C. Costco locations, or at select ski shops in the province.

Big White is blessed with a vast spread of terrain difficulty. There’s everything from gentle blue circle runs for beginners to steep double blacks, powder bowls and tree-dotted glades.

Some of the best runs are to be had by the Falcon glades, accessible from the Falcon chair. Follow the mountain down through the Corkscrew glades, then the Sapphire glades and the Blackout glades.

Elsewhere, the Enchanted Forest offers solid terrain that isn’t as dense as some of the other gladed zones. 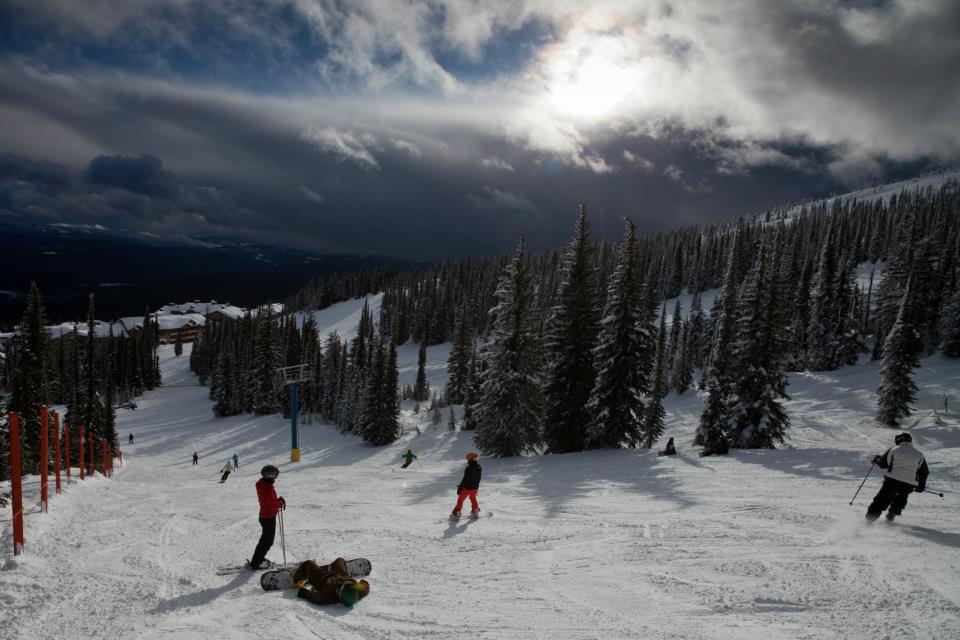 A view of some of Big White’s on-piste groomed runs.

The Parachute Bowl is a must – especially when there’s fresh powder.

For moderate difficulty, Paradise and Roller Coaster are both manageable runs with scenic vistas.

As you can tell, there’s a vast range of terrain and for good reason. Big White is the second-biggest resort in B.C., behind the behemoth, Whistler.

The lift network is well-designed for the mountain, and lift lines are almost non-existent, especially during the week.

Big White deserves its name. If it’s not snowing, the mountain at the edge of the Kootenay range is likely in a cloud and snow will come in time.

The place has an average snowfall of 750 cms a season – that’s more than seven metres.

Big White isn’t the resort if you’re looking to call it an early day and pond back drinks from lunch until sundown. Nor is it the resort with the rowdiest apres scene.

The calm, spacious village at Big White is great for families.

To be honest, no particular bar or restaurant stood out – so I can’t recommend any for you to go to.

Your best bet is to stop on the mountain for lunch, and then to prepare a wicked dinner at your accommodations if there is a kitchenette or kitchen.

For the same reason, the resort after dark is family friendly and it’s unlikely you’ll come across a drunken group of teens or twenty-somethings on your way back from a family dinner.